What we are ready to celebrate this year is a prestigious anniversary: 40 years of history begin to be an important baggage, they represent a significant goal, which we consider not as a point of arrival but as a fundamental step in a story that is still all in becoming:

a moment to celebrate successes and also to thank our customers, our collaborators and the partners who have supported us, who have shared our projects and who have grown up with us.

On one hand we feel the desire to celebrate this goal, to retrace our history and to proudly rethink about the important goals achieved; on the other hand we are ready for the challenges of the future, which we approach with the serenity of the experience gained and with the continuous desire to put ourselves on the line bringing with us the typical characteristics of Made in Italy, which means a production of excellence, customized, extremely flexible and attentive to customer needs, projected into an increasingly global market. Ours is an adventure that began forty years ago with enthusiasm and recklessness that over the years has led to structuring an internationally recognized company as a solid partner and referent of absolute prestige and reliability.
Many of the excellences that Made in Italy expresses in every field have a peculiar common trait: they are family businesses, they are businesses that compete and very often they win on the international scene because they are strongly motivated by values matured over time that get even deeper in the succession of generations. Long-lasting relationships with collaborators, suppliers and customers testify a solidity in relationships that allows a stable human bond and in-depth knowledge of customer needs, all combined with a continuous search for innovation: the years go by, the needs of the markets and the available technologies too but it is the Company’s task to remain attentive to market inputs, interpreting them with intuition, dynamism and sensitivity. 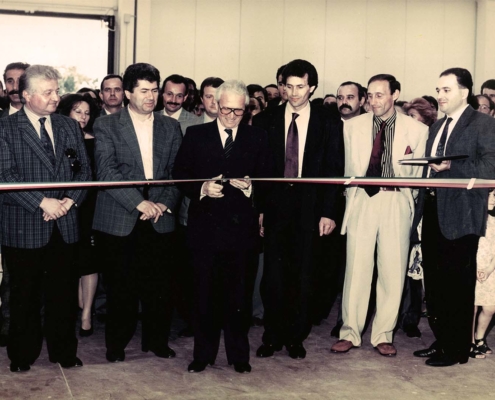 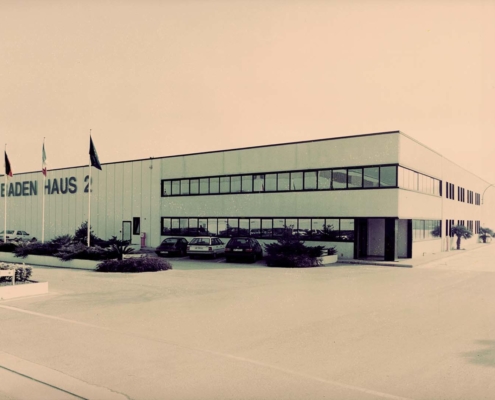 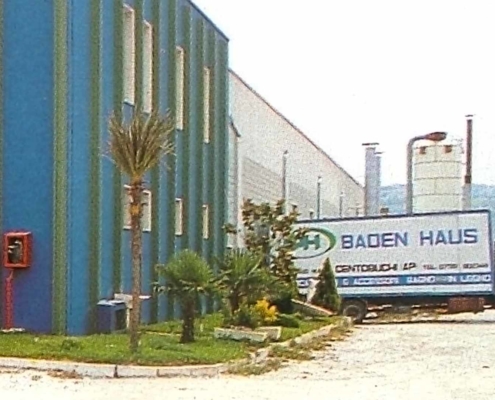 Industry 4.0, thanks to a technological mix of automation, information, connection and programming, will lead the experts to the fourth industrial revolution: the world is increasingly interconnected and industries need to know the potential that comes from digitalization, so as to use it to own advantage. Our company between 2018 and 2019 has dedicated a strong commitment to this initiative, in terms of people and in economic terms, and today finds itself in an optimal position within this “digital transformation” which, as we said, is from the most defined as the fourth industrial revolution after the first of 1784 born from the birth of the steam engine passing through the second in 1870 characterized by the introduction of the electricity and the internal combustion engine up to the third dated 1970 with the birth of computer science.The Factory 4.0, also called Smart Factory, consists of constantly interconnected machines, capable of self-diagnostics, of solving problems that arise during the business process, connection between physical and digital systems, complex analysis through Big Data and real-time adaptations , in other words the use of machinery connected to the Web, analysis of the information obtained from the Network and the possibility of a more flexible management of the production cycle.The areas that have been affected from this digital transformation within our company concern the most important work centers such as the cutting, the squaring-edge banding line and the numerically controlled machines for the realization of special processes such as the 45 degree edging and the folding processing.Consequently this industrial renewal has invested the entire management system with a new ERP, capable of connecting the various work centers for a step-by-step production control, through the virtual reproduction of the workflow in order to verify the behavior and to enhance its performance. 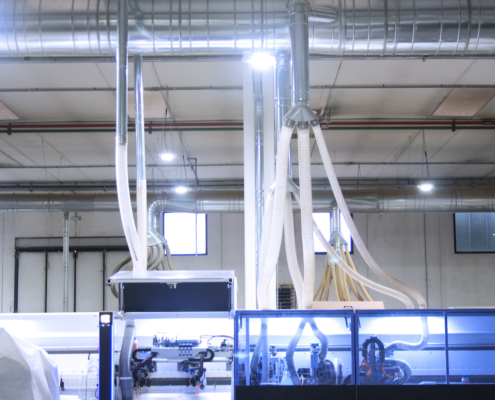 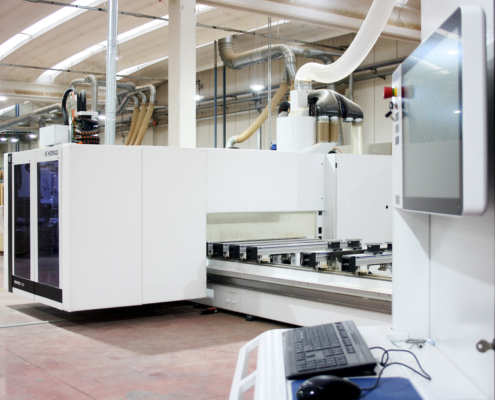 In 1979 a long tradition of craftsmanship in the bathroom furniture sector was born from a small factory of just 300 square meters, this tradition led the growth of our company over the years. Strongly focused on the Made in Italy, we have always carried out our production in Italy in our factory, which today, following new acquisitions and expansions, is developed on an efficient and modern plant of around 65,000 square meters, of which 35,000 are dedicated to production and 30,000 divided between assembly, logistics, offices and a renovated showroom of approximately 800 sqm.Our three factories where the entire production process takes place, from the raw material to the finished product, are equipped with the lastest technologies and machinery, recently renewed and enhanced thanks to the digitalisation of industry 4.0 .In a perspective of continuous and constant growth, a further extension of approximately 45,000 square meters was planned, destined for the storage of the finished product and logistics to meet the growing demand and to better face the challenges that the market has to offer. 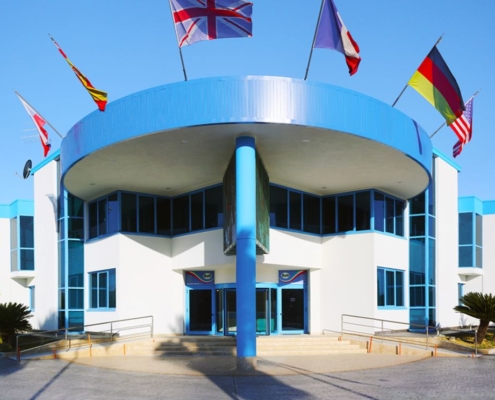 countries where we export to

The participation of BADEN HAUS in the sector trade fairs has always been a constant in the history of the company, since its birth in 1979 it wanted to be present at the most important events related to the Bathroom Furniture field. The trade fairs represent a meeting point between companies and consumers, a place where you can also go to collect ideas and inspirations, networking, exchange knowledge and know-how and improve your brand identity. as well as offering a glimpse of the new markets that are opening or have already been opened. Over the years the investment destined to the partecipation to these events has become increasingly important and central in the company’s development policy: the belief that the presence at these events was a determining factor for a solid growth of the business and the brand has reached the present day considering the massive and constant participation in major worldwide events such as the SALONE DEL MOBILE in Milan, the ISH in Frankfurt, the CERSAIE in Bologna, the MOSBUILD in Moscow, the KBIS in the United States, the ICFF in New York, the Big 5 SHOW of Dubai and many other events in the world. 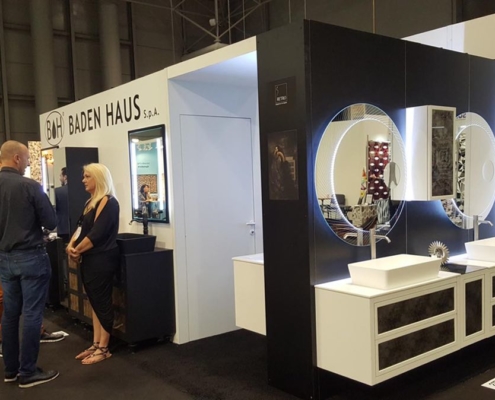 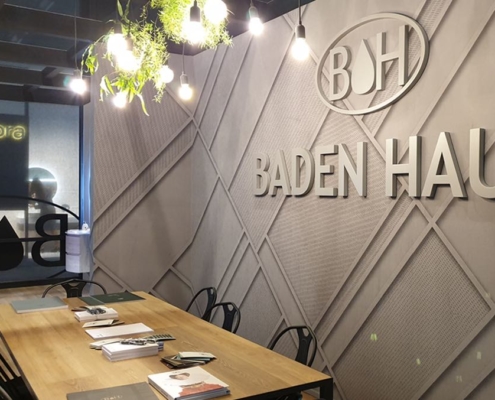 Over the last few years our company has undergone exponential growth not only nationally but also internationally, acquiring more and more markets throughout Europe and the rest of the world, so much so that today the export turnover represents more than half of the total turnover.The European market and the removal of national barriers have in fact contributed to the consolidation of long-term commercial relations with European Union countries, including France, Germany, Hungary, Austria, Czech Rep., Slovenia, Croatia and the Netherlands .As a family company, the internationalization process has always been a very ambitious project. Internationalization requires a broad vision of its business, a review of business strategies and of the product itself. A successful family business must be able to cope with these changes and to adapt them to their internal processes in order to respond effectively to market challenges. The flexibility and strong proactive spirit that distinguish us today have allowed us to further extend our borders to new potentially strong markets as the United States, Russia, Canada, Middle East Countries, Algeria, Morocco and also more “exotic” smaller interesting markets as Aruba, Havana and the Cayman Islands.

WE ARE IN THE WORLD

For some time now, the word “Green” has become commonplace in our vocabulary, declinable in many ways and in more than one sector, consumers are increasingly sensitive to the quality of the environment in which they live and therefore to the sustainability of the products they buy. Environmental sustainability has become a commitment today: Companies and Citizens have the duty to drive the change on this issue, sustainability must be created by ourselves and doesn’t have to fall from above through directives; the Green issue is as timely as ever, but so hang in the balance between science and fashion, between statements of intent and inconsistent behavior, between politics and economics, between philosophy and marketing. Choosing eco-friendly furniture means preferring the use of natural materials and this is where our adhesion to the PEFC Program is born (Program for Endorsement of Forest Certification schemes,),a non-governmental, non-profit, independent world organization that promotes the responsible management of forests in the world. The PEFC certification identifies products made of wood raw material that comes from PEFC certified forests (two thirds of certified forests in the world are managed in compliance with the PEFC Sustainability criteria), a forest is managed in a sustainable way when: – the quantity of cut wood is never higher than the quantity that grows in the forest; – after cutting, the trees will be replanted or helped to renew naturally; – the habitats for wild plants and animals and all those protection functions that the forest normally carries out with regard to climate, soil and water are protected. Between 2018 and 2019 the hectares of forests in Italy are increaed, like also the forests managed in a sustainable manner: almost one million hectares between Trentino-Alto-Adige, Veneto, Tuscany and recently also Marche and Campania. 5th of June 2019 was World Environment Day, a day when the Earth was at the center of numerous events and demonstrations, each of which promoted more sustainable behavior that respected the natural heritage of the Planet: using PEFC certified products is one of the solutions for those who want to protect the Earth by choosing a sustainable lifestyle.

Several international reports show that Italy is the second oldest country in the world after Japan and the oldest working population in Europe: in 2016 the average age of employed people in Italy was 44, compared to an average of 42 registered in the main EU countries; in the last 20 years, moreover, the average age of Italian workers has risen by 5 years, an increase that in no other country has been so significant. The pressure from demographic dynamics on labor markets combined with the stalemate of generational turnover in the national labor market, shows how the issue of the aging population in general, and of the workforce in particular, are very current topics but in this case it makes us proud to say that our company is moving countertrend! The recorded average age in 2019 within our Company is 35 years, a significantly lower figure than the national and European average: if we want to deeper analyze the data it emerges that the average age of the workforce engaged in production departments is equal to 33 years, while the management is equal to 37. All this while preserving a company characteristic as the longevity of relations with employees combined with a strong territorial roots. Human resources are a very important patrimony, so we invest in them:employee training is integrated with specific courses to increase their skills and to allow constant updating in terms of innovation and current regulations, all to be ready to face the challenges required by an increasingly global and competitive market.